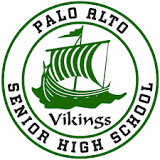 Education of Palo Alto's young people has been important to residents from the town's earliest days. When the first public school was organized in 1898, it was the only secondary school between San Jose and San Mateo. Two years later, a high school was built at the present site of Channing House. Continued town growth later made a larger facility necessary.

On December 24, 1918 students, faculty, and local dignitaries marched from Channing School to the new Palo Alto High School with the 91st Company of High School Cadets triumphantly leading the way. The community was impressed with the school's auditorium - unique at a time when even Stanford had none - and the high ceilinged library which doubled as a ballroom.

When the present Palo Alto High School was built in 1919, some townsfolk were critical of a location so far out of town. But the 30-acre site with its live oak trees was being sold by neighboring Stanford University at the token cost of $1.00 per acre, and optimists thought that Palo Alto might well grow to the south.

Over the years Paly changed from a four-year school to a three-year school as the ninth grade shifted to David Starr Jordan Junior High constructed in 1935. Additional buildings constructed on campus were partially demolished when major reconstruction was undertaken in 1972 to comply with earthquake standards. Today Palo Alto High School is a skillful blending of the original Spanish architecture combined with a modern complex of newer buildings including The Performing Arts Center, The Media Arts Center, A Math and History/Social Studies two-story building known as "The 800 Building".  The latest addition is The Peery Family Athletic Center planning it's Grand Opening in October, 2017.  Construction has started on the new Library.

Paly remained the only Palo Alto high school until Elwood P. Cubberley opened in the fall of 1956 with 500 students. Four years later, Cubberley had its peak attendance of 1600 students. Henry M. Gunn High School opened in 1964. In recent years the senior high schools have again become four-year schools. Declining enrollment and limited funds have caused the school board to close a third of Palo Alto's schools. Cubberley High School closed in June 1979 with its former students going to either Paly or Gunn.

Today Paly has a student population of about 2150 and is one of two high schools in Palo Alto. Currently, Paly is undergoing construction to modernize its buildings. The administration has carefully ensured that student learning will continue unabated.

On December 8, 1914, Palo Alto Union High School Board selected the architectural firm of Allison and Allison to design a new high school for the combined Mayfield, Stanford, and Palo Alto School Districts. The plan was described in the local paper as being designed to "save the trees...secure the maximum of light and air for each room, and avoid cutting the front elevations into gridirons by endless series of jail-like windows". Construction began in 1917 on a 30 acre, oak tree studded site donated by Stanford University, and was completed in December 1918 at a cost of $225,000.00. In sharp contrast to the typical urban high schools of the time, the campus was described by David Starr Jordan as a "distinct and pleasant surprise".

"There is about this group of buildings the charm of the olden-time California Mission and the spirit of the small college. Viewed from any approach, the building appears to be an irregular mass, picturesque in effect, warm and bright in color, and attractive as well as inviting."

The plan arranged the buildings around a series of "patios" including a "Study Court", an informal grassy square, a "Girls Exercise Court" and a large circulation space. The Administration building and Auditorium were placed at the primary frontages. In 1923, Palo Alto High School received a medal award from the Southern California Chapter of the American Institute of Architects during a three-year retrospective for "the best piece of architectural work in (its) class."

The Haymarket Theatre remains along with the Tower Building (the Administration Bldg), the only surviving portion of the campus as originally designed by Allison and Allison in 1917. Linked by arched arcades, the two buildings anchor the northwest corner of the present high school campus. The Historic Resources Inventory form prepared by the Historic Resources Board describes the buildings as "the visual focal point of the more recent buildings in the high school complex".

The architects Allison and Allison were well known statewide for their school designs. The February 1923 issue of The building Review published illustrations of over 40 of their school buildings. The article praised the quality and breadth of their school experience, and singled out the designs for the high schools in Santa Monica, Palo Alto, and Santa Maria and were described as being "outstanding examples of the Romanesque inspiration". Allison and Allison's work also include the Los Angeles State Normal School which later served as the Southern Branch of the University of California before the construction of the Westwood Campus of UCLA, and Royce Hall on the UCLA campus. There was apparently a good deal of controversy over the selection of the Southern California firm to design the new high school. In January of 1917 the Palo Alto Union High School Board issued a statement to the citizens of the district defending their decision, which included the following statement about the architects: "After long and most careful investigation by means of visits to the schools built by various architects,and the testimony of a large number of school men of the state and school boards which had dealings with them, as well as opinions of other general architects and representative engineers, the board selected Allison and ALlison as the best school architects in the state."